Worries regarding a second wave of infections heading into the fall, election uncertainties, and wavering economic indicators contributed to a dubious September.

Equities paused from their upward trajectory in September, with technology stocks repelling from their highs. Uncertainty surrounding vaccine deployment and the election are expected to influence market momentum and investor confidence. Election results will help determine the direction of fiscal policy and social program funding.

A growing number of pharmaceutical companies, universities, and biotech firms are introducing and testing various forms of vaccines to combat COVID-19. According to the Regulatory Affairs Professional Society (RAPS), there are currently over 40 COVID-19 vaccines in trial phases worldwide.

California became the first state to require that all new autos sold be zero-emission by 2035. The executive order issued by the state’s governor is expected to reverberate throughout the country, possibly leading other states to follow suit.

The Centers for Disease Control and Prevention (CDC) issued detailed guidance for this Halloween season. Among them, not to substitute a costume mask for a cloth mask, not to attend crowded costume parties, avoid visiting indoor haunted houses, and refrain from traditional door to door trick-or-treating. 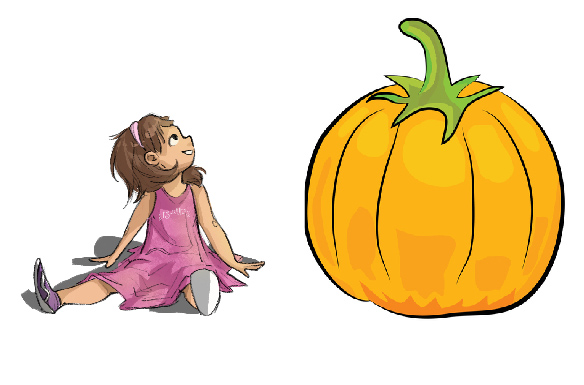 With some schools resuming across the country, the CDC reported that COVID-19 cases in 19 year olds and younger have risen three-fold since May. The large increase may suggest that younger people may play an increasingly important role in community transmission, even if their risk of serious illness is low relative to the older population. The threat of a second wave of infections brought about by COVID-19 are reminiscent of the fall of 1918, when the second wave of the Spanish flu pandemic was more severe than the first.

Comments by Fed Chairman Jerome Powell indicated that additional aid to small businesses and unemployed individuals was critical for economic expansion during the pandemic. The Fed Chair urged for the passage of a second stimulus package, which has been delayed due to a Congressional impasse.

Despite a pullback in September, equities managed to end the third quarter with gains. The technology sector was the primary contributor to the S&P 500 Index, which was up 8.93% for the third quarter. Consumer discretionary and industrial stocks also performed well during the quarter, exemplifying some economic recovery characteristics.

Following an upward surge during this summer, September witnessed a tapering of equity momentum, leading to lower valuations. The three major equity indices, Dow Jones Industrial, S&P 500 Index, and the Nasdaq were off in September, but positive for the third quarter ending September 30th. (Sources: S&P, Bloomberg, Dow Jones, Nasdaq)

The Federal Reserve continues to purchase $120 billion of Treasury and mortgage agency bonds each month, expanding its balance sheet to over $7 trillion as of the end of September. The monumental buying is meant to facilitate bond market activity while maintaining a relatively low-rate environment.

The most recent labor statistics made available by the U.S. Department of Labor is identifying more impactful increases in unemployment in certain industries than others. Economists and analysts believe that the year-over-year increases in unemployment are attributable to the pandemic, where mandatory closures and restrictions are continuing to hinder businesses and workers nationwide. 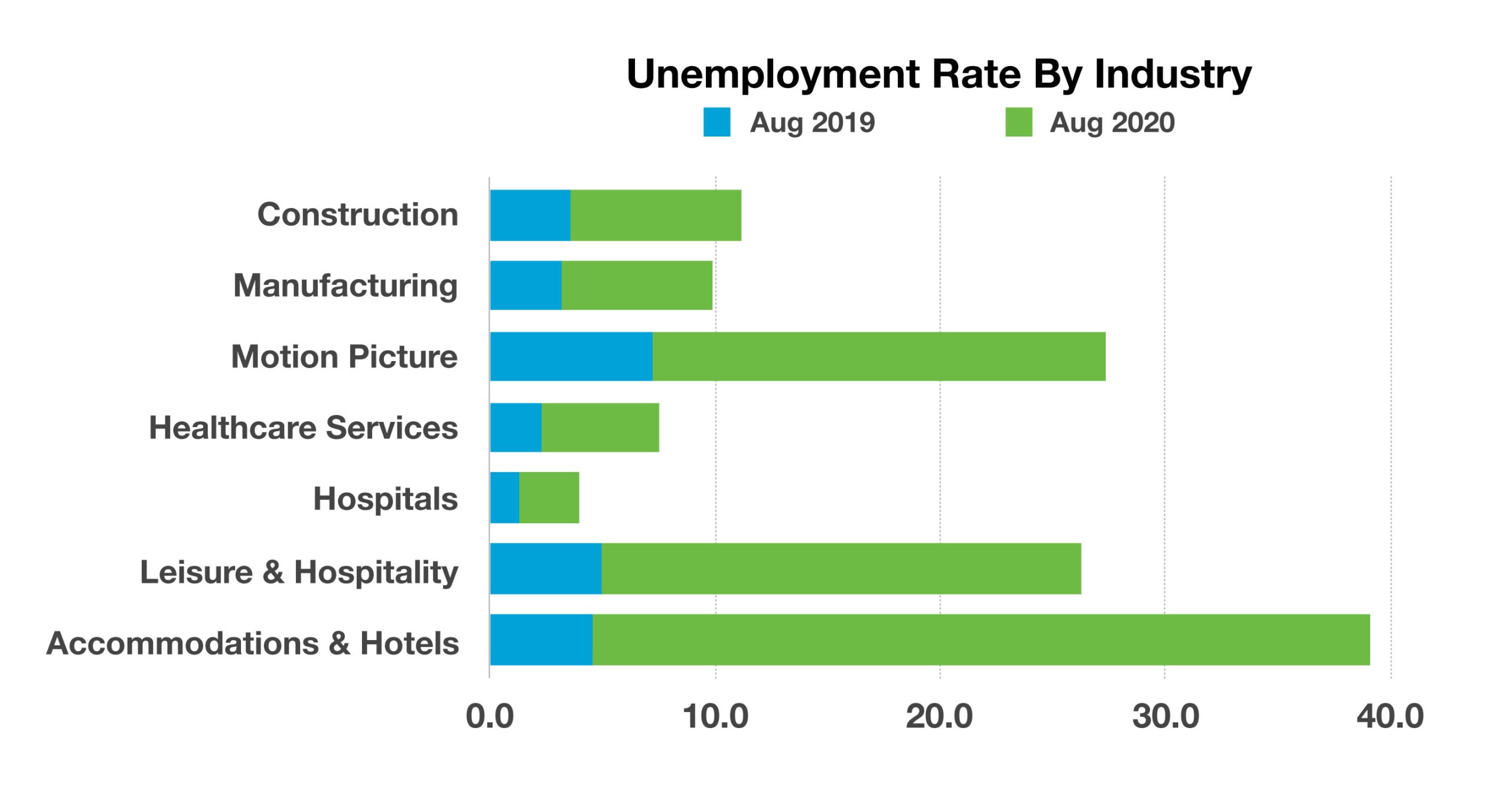 Unemployment is affecting various occupations differently, as the impact of the pandemic displaces certain workers more than others. Economists believe that the disparity enhances the negative affects on lower income workers versus higher earnings, creating even more inequality among the nation’s workforce.

Euphoric media reports about the housing market are starting to come into question, as the fragility of the housing market is gradually being exposed. The FHFA House Price Index revealed that housing prices nationwide rose a paltry 5.4% in the past year, with some regions seeing much slower growth.

The onset of the pandemic in March brought about a flurry of stimulus efforts meant to ease the financial burden for millions of Americans. Housing was a primary concern as the unemployment rate spiked and paychecks dwindled. In response, the Federal Housing Finance Administration (FHFA) announced a moratorium for both evictions and foreclosures through August 31, 2020. That moratorium has since been extended to the end of the year to allow homeowners additional time to sort out and catch up on their rent and mortgage payments.

Any federally backed loans, such as FHA-insured loans, have allowed homeowners to skip their mortgage payments by means of forbearance. 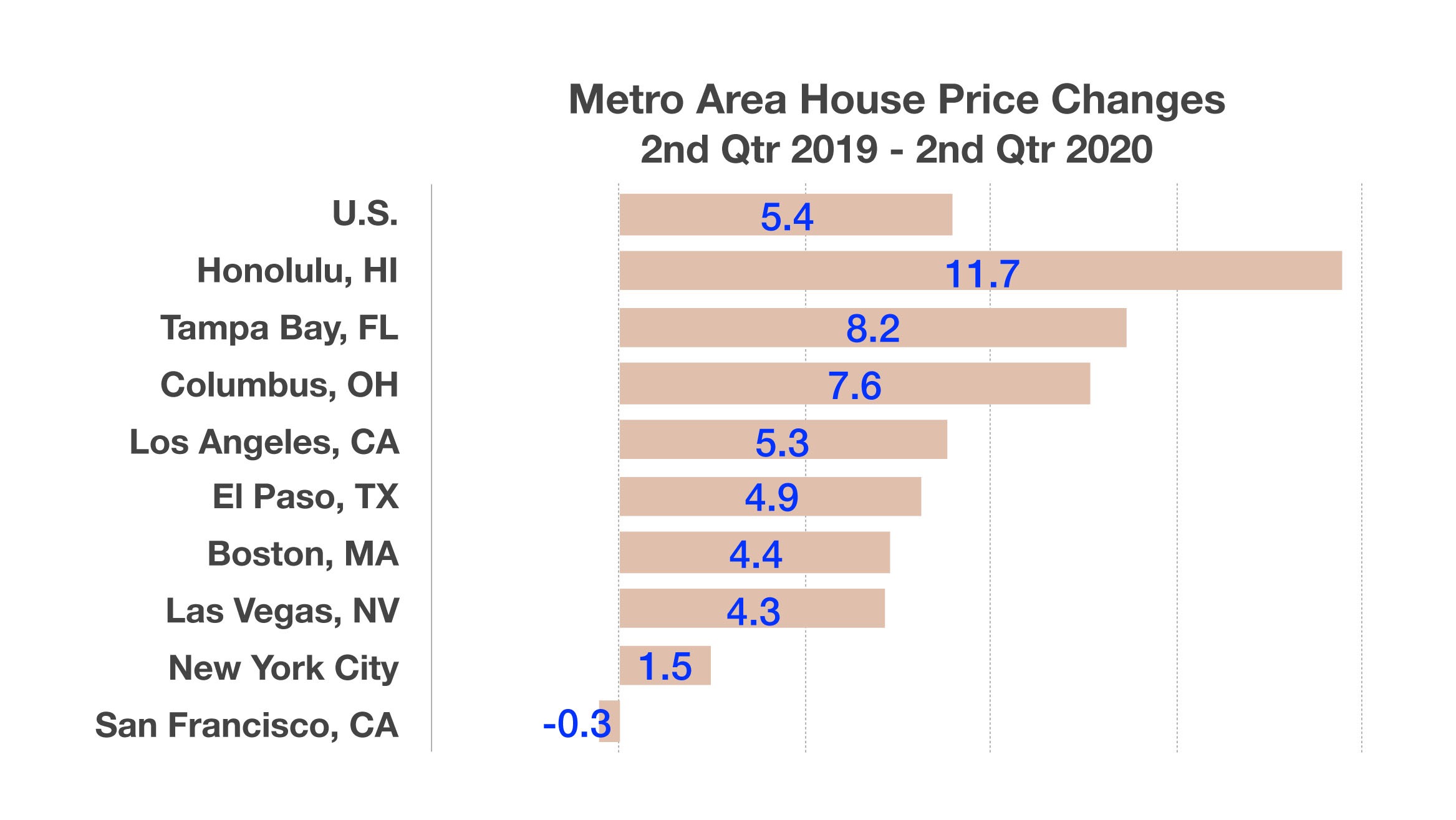 Store and restaurant closures have prompted consumers nationwide to stay home, spend less, and save more. Dwindling consumer confidence along with uncertainty surrounding the job market, has shifted many from a spending mode to a saving mode. The average savings rate for the past 60 years since 1959, has been 8.9%. The savings rate jumped from 8.4% in February this year to 32.2% in April as the pandemic took hold of the U.S. economy. The most recent data release shows the savings rate at 25.7% for the quarter ending June, nearly triple of the 60-year average. 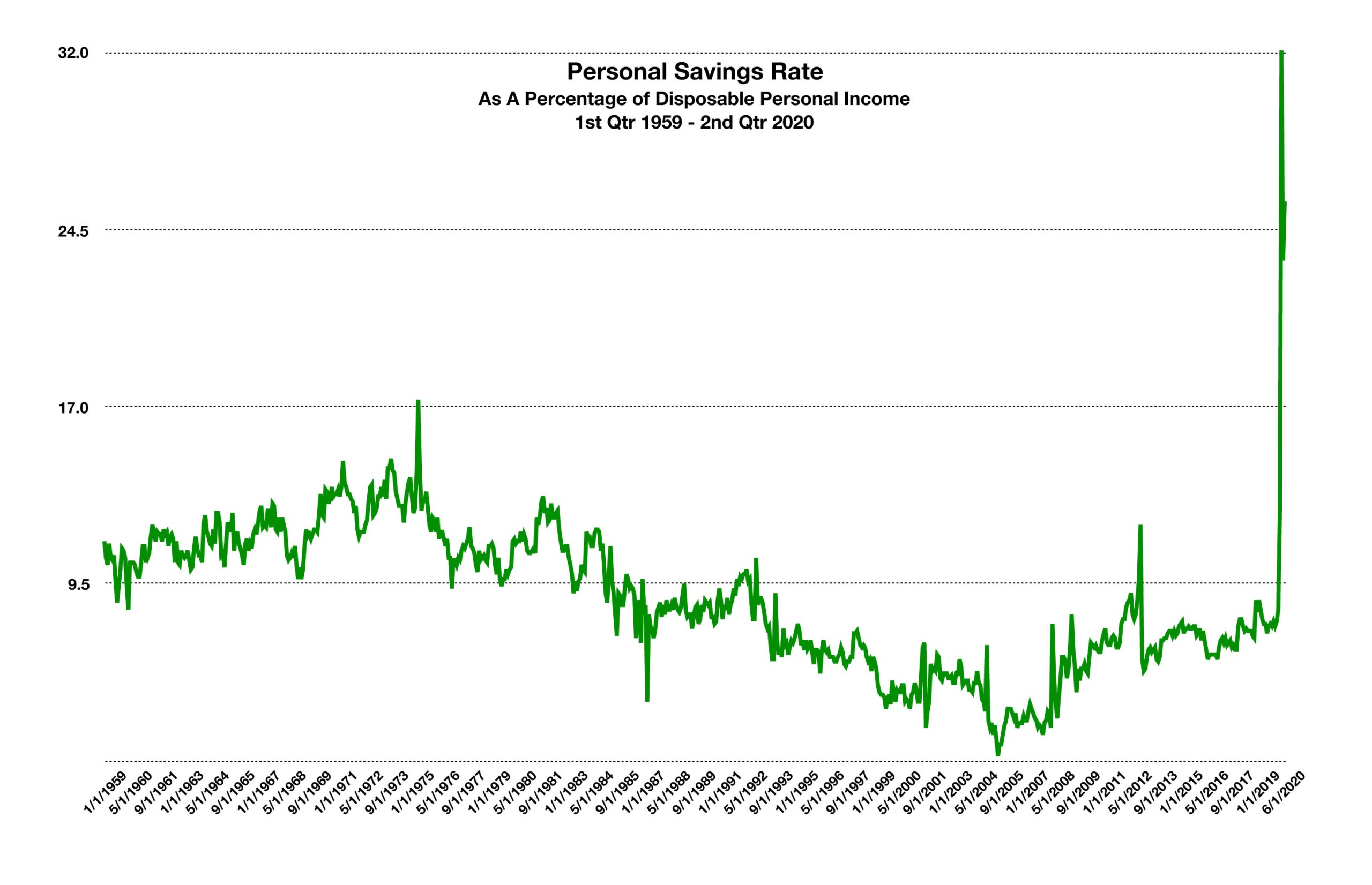 Economists view the heightened level of savings as restrictive to a sustained economic expansion. Since nearly 70% of GDP is represented by consumer expenditures, higher savings tend to take away from spending throughout the economy. Consumer confidence is also a factor as a lack of confidence tends to increase savings while minimizing spending. (Source: https://fred.stlouisfed.org)

The governor of California issued an executive order in September requiring that all automobiles sold in the state would be zero-emission by 2035. The announcement gives auto manufacturers 15 years to transition from gasoline and diesel engines to zero-emission engines. The state order did not specify what form of zero-emission engines would be required, such as battery or hydrogen powered. Sales of used gasoline powered vehicles, however, would still be allowed. California has become the first state to require a transition from gasoline to zero-emission vehicle sales, essentially outlawing new non zero-emission vehicle sales. The new requirement may eventually affect other states as California has traditionally set trends with environmental regulations nationwide. Auto manufacturers will have to convert and expand production to produce the demand expected for zero-emission vehicles over the next 15 years. As of this past August, there were only 543,610 registrations nationwide for electric automobiles, representing less than one percent of the 273.6 million vehicles currently registered in the United States. California has historically been the largest zero-emission auto market in the country, with Oregon and Washington states a distant second and third.

In response to California’s executive order, the Environmental Protection Agency (EPA) argued that the mandate is impractical and possibly illegal under current Federal legislation. The EPA noted that California, like some other states, is already suffering from rolling blackouts, affecting residences and businesses statewide. The additional electric automobiles would impose additional strain on the electric grid further crippling its ability to efficiently distribute energy. (Sources: www.library.ca.gov, U.S. Department of Energy)