Tranquility that fell upon markets as volatility receded in April was interrupted by a return of uncertainty surrounding trade negotiations between China and the United States.

Incomplete trade discussions with China are still a threat to global markets as an agreement regarding tariffs and intellectual property rights has yet to be finalized. U.S. government revenues from tariffs already in place on Chinese imports stand at about $5 billion per month.5a453ee7acdea1742455e56c

Equity markets reached higher levels in April as trade fears ebbed and rising rate expectations remained modest. The Federal Reserve signaled that it would be patient in raising rates further, which instilled a calm over financial markets. Markets have become increasingly data sensitive trying to decipher what reaction the Fed may have following the release of economic data.

Data released by the Bureau of Economic Analysis (BEA) showed a slowdown in consumption since the beginning of the year, attributable to the government shutdown, poor weather, and market volatility in December.

Oil prices reacted when the U.S. eliminated a waiver for countries buying oil from Iran, which had sanctions imposed this past year. Domestic crude oil, priced as West Texas Intermediate (WTI) surpassed $66 per barrel in April, among the highest levels in 8 months.

Market analysts and economists attribute low inflation and a low probability of recession as the reasons behind persistent slow economic growth. This dynamic is known as secular stagnation, a condition of negligible or no economic growth in a market-based economy.

During a hearing before the House Committee on Oversight & Government Reform, the Postmaster General said that the USPS is considering reducing mail delivery to 5 days per week. A decline in first class mail volume has created a financial burden for the USPS, which ended fiscal 2018 with a $3.9 billion loss.

The unemployment rate fell to a 50-year low of 3.6% in April, the lowest since 1969. Even with such low unemployment, wage growth is still weak with some blaming a shrinking pool of qualified workers and an older aged work force demanding less pay increases than their younger counterparts. (Source: Federal Reserve Bank of St. Louis, Dept. of Commerce, USPS, Labor Dept)

Domestic and foreign equity indices rose in April as rates stabilized and earnings for most companies were as expected or better. Some analysts were perplexed as the leading sectors in April were information technologies and financials, contributing over half of the S&P 500 Index 4.05% return for April. Earnings and optimism surrounding the trade discussions helped elevate shares across all sectors. 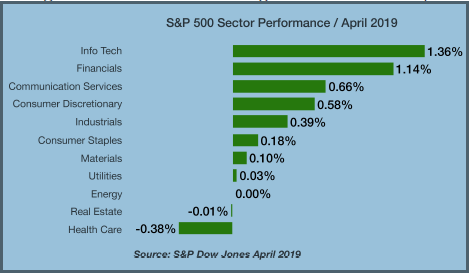 Optimistically, even though equity analysts are expecting a slowdown in corporate earnings, they are not seeing a slowdown in revenue growth. This is interpreted as underlying economic growth, which may eventually fuel an increase in earnings. The S&P 500 Index at the end of April was trading at roughly 17 times forward earnings, where it was at the peak in September 2018. A rapid rise in equity and fixed income prices since the steep drop in the fall of 2018 was unexpected by many. (Sources: S&P, Bloomberg, Reuters)

Rates stabilized in April as government and corporate sectors saw a gradual increase in yields. Analysts and economists view a slight increase in rates following a sharp decrease in yields, as a form of stabilization in the fixed income markets. The Fed consoled markets with a hold-and-wait stance as it announced no change in short-term rates. Deflation and stagnate growth remains an issue validated by rates at near zero or below in Japan and Germany, two primary global economic barometers. Such an environment continues to make U.S. government bond yields attractive relative to other developed nations’ debt.

The rate for a conforming 30-year mortgage fell to 4.14% in April, down from 4.55% in April of 2018, which may bode well for the housing market heading into the summer selling season. The difference in rates from a year ago is equal to a mortgage payment reduction of roughly $75 per month on a $307,700, 30-year mortgage, which is the average sales price for a home nationwide as of this past month. (Sources: U.S. Treasury, Federal Reserve, Bloomberg)

An estimated 76.4 million Americans, identified as households, paid no federal income tax for tax 2018. The non-partisan, non-profit tax group known as The Tax Policy Center released income tax data it analyzed for 2018 and found that nearly half, about 44.4% of American households, paid no federal income tax last year. The Tax Policy Center estimates that the number of Americans that did not pay income tax for tax year 2018 increased from 72.6 million in 2016, before the Tax Cuts & Jobs Act became effective.

According to the data, the top 0.1% of taxpayers pay the equivalent of 39.2% of all taxes while the bottom 20% pay no taxes and receive tax refunds in the form of refundable tax credits. The ultra wealthy, also known as the top 1% of taxpayers, with annual incomes of about $2 million, pay about 40% of all of the federal income taxes in the U.S. (Source: Tax Policy Center/Washington D.C.) 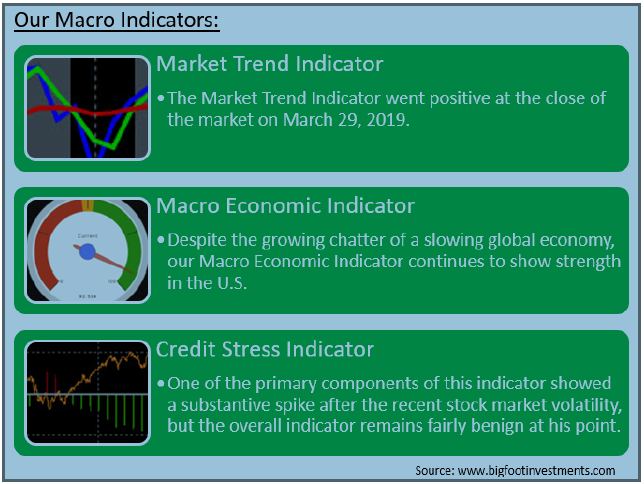 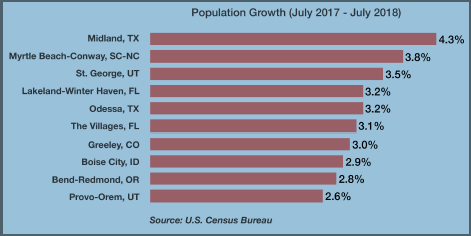 These communities have become attractive for seniors providing essential services and amenities all within a single location. Various factors have historically affected population growth throughout the United States including demographics, local industry and the economy. An aging baby boom generation along with job development in the oil sector has been the primary driver of growth for the nation’s fastest growing cities. (Source: Census Bureau)

Social Security costs will exceed its income in 2020 for the first time since 1982, forcing the program to dip into it’s trust fund, which is currently just under $3 trillion. Social Security is funded by two trust funds, one for retiree benefits and another for disability benefits. Disability applications have actually been declining since 2010, with a decreasing number of workers receiving disability benefits since 2014. The latest annual report issued by the trustees of Social Security and Medicare revealed that by 2034, the program’s trust fund will be depleted. Depletion means that Social Security recipients will no longer be receiving full scheduled benefits. Recipients would receive about three-quarters of their scheduled benefits after 2034. Congress can eventually act to fortify the program’s finances, but it may be years before it actually takes effect and funds. Social Security’s largest costs are attributable to Medicare, which represents over 76% of Social Security benefits. The report also mentioned that Medicare’s hospital insurance fund would be depleted in 2026. The trustees noted that the aging population of the country has placed additional pressure on both the Social Security and Medicare programs. A decade ago, roughly 12% of Americans were age 65 or older, today 16% of Americans have already surpassed 65, the eligibility age for Medicare.

The Social Security Administration considers various factors in projecting its estimates, including fertility, immigration,  ages, health, and economic growth. A recent drop in U.S. birthrates along with stagnant wages has placed additional burden on the viability of future benefit payments. Sources: https://www.ssa.gov/oact/TR/2019/index.html

Market Returns: All data is indicative of total return which includes capital gain/loss and reinvested dividends for noted period. Index data sources; MSCI, DJ-UBSCI, WTI, IDC, S&P. The information provided is believed to be reliable, but its accuracy or completeness is not warranted. This material is not intended as an offer or solicitation for the purchase or sale of any stock, bond, mutual fund, or any other financial instrument. The views and strategies discussed herein may not be appropriate and/or suitable for all investors. This material is meant solely for informational purposes, and is not intended to suffice as any type of accounting, legal, tax, or estate planning advice. Any and all forecasts mentioned are for illustrative purposes only and should not be interpreted as investment recommendations. Securities offered through Triad Advisors LLC, member FINRA/SIPC.Advisory services offered through OVERRIDGE WEALTH ADVISORS. OVERRIDGE is an Idependent Registered Investment Advisor and is not affiliated with Triad Advisors LLC.