A resurgence of sporadic economic activity emerged in May as stay at home bans were eased and some businesses slowly reopened. Virus resurgence fears are still a concern as uncertainty surrounding the availability of a vaccine lingers.

Following April’s rebound for U.S. equities, May continued to post recaptured gains for all major stock indices. Slow re-openings by states and cities have allowed a gradual reactivation of economic activity benefiting nearly all sectors of the equity markets.

Unemployment hit 14.7%, the highest since the great depression era, when unemployment was 25%. All income and education levels were profoundly affected, with over 40 million applying for unemployment claims since the middle of March. The extent of the lock down for businesses nationwide is being blamed for a vast amount of small business bankruptcies that may prohibit the re-hiring of millions of workers in numerous industries.

Retail sales in April saw their largest decline on record, the result of mandatory store closings and stay at home requirements. Industrial and manufacturing activity also fell in April, an indicator of a slower economic environment. Economic damage may not be fully recognized for months as lagging data tracked by various government agencies trickle into the headlines and financial markets. Consumer confidence, as measured by the University of Michigan CC Index, improved in May as consumers sought hope from the gradual easing of the virus quarantine. Inflation expectations also increased as scarce goods demanded higher prices across the country.

Economists and analysts are curious as to how the millions of unemployed workers will sustain themselves when their unemployment benefits expire. The $600 weekly unemployment benefit provided by the federal government expires on July 31st, unless extended by Congress. Individual state benefits vary on maximum weekly amounts, duration, and extension qualifications.

A study compiled by the Chicago Federal Reserve revealed that consumers spent nearly half of their federal stimulus checks within two weeks, then reverting to their prior spending habits. Economists expect that the economic effects of the one-time payments will be short lived.

Congress is expected to extend the period of time allotted for small businesses to use funds provided by the Paycheck Protection Program (PPP) from 8 weeks to 24 weeks. The additional time allows businesses to apply funds to approved expenses including payroll, rent, and utilities.

Equities Rebound In May

The rebound in equities over the past two months, was not anticipated by many analysts and economists, as fiscal and monetary stimulus efforts were not expected to produce ample benefits until later in the year. (Sources: congress.gov, Bloomberg)

Interest rates held steady in May, with the benchmark 10-year Treasury bond yielding 0.65% at the end of May. The continued low-rate environment is helping to sustain certain industries in the form of low loan rates, such as for autos and homes. Talk of negative rates in the U.S. became more commonplace as other developed economies continued to drive their rates to near zero and below with the objective of stimulating economic activity. The Fed chair reiterated the central bank’s stance on negative rates, stating that it was not a target for the time being. The Fed is opposed to negative rates because of the detrimental effects it imposes on money market funds, government funding calculations and banks.

Investment grade bond issuance surpassed $1 trillion worth of new debt since the beginning of the year, an amount that wasn’t reached last year until November. The Fed’s announcement to purchase $750 billion of corporate debt as part of its stimulus program has stimulated new activity as demand has increased. (Sources: Treasury Dept., Federal Reserve Bank)

States and local government entities are struggling with a dramatic and rapid drop in tax revenues following business closures and quarantines that were set into place nearly three months ago. Stay at home mandates forced consumers to abandon retail shopping, dining out, and visiting hair salons leading numerous small businesses to close doors and layoff employees. The result has been a historical increase in unemployment leaving states with billions of dollars lost in payroll and income taxes. 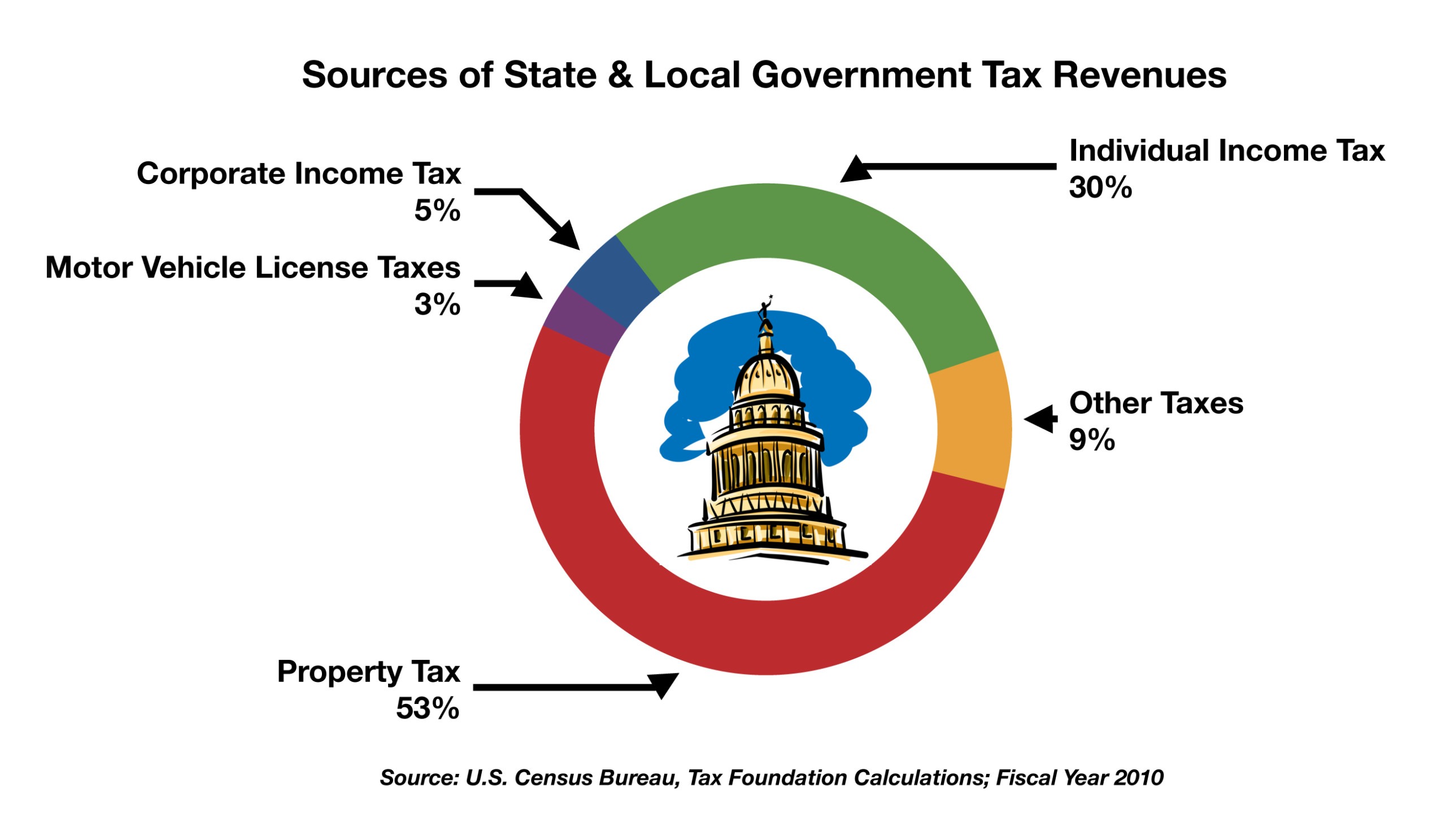 The dramatic loss of jobs has also led to mortgages and property taxes not being paid as homeowners struggle to meet ends. Data collected by the U.S. Census Bureau and the Tax Foundation identify that over 50 percent of state and local government revenues have come from property taxes over the past decade. Individual income taxes are significant, representing 30% of tax revenues while corporate income taxes make up roughly 5%. That’s why the dramatic increase in unemployment is so critical to state and local economies. (Sources: U.S. Census Bureau, The Tax Foundation)

Where Unemployment Is Hitting The Hardest

The nation’s unemployment rate skyrocketed to 14.7% in April, representing the largest percentage of unemployed workers since the great depression, when the rate reached 25% in 1933. The pandemic’s affect on the labor force has been extensive and rapid, resulting in a dramatic increase in the unemployment rate.

What has truly made this spike in unemployment unique is the fact that all sectors of the economy have been affected, along with all income and education levels. Data compiled by the Department of Labor show that all income and education levels fell considerably in April 2020. Unemployment has historically been highest for non-high school graduates and recent high school graduates, relative to those with bachelor and masters degrees who traditionally see the lowest unemployment rates.

Unemployment for non-high school grads rose to over 20% in April, up from 5.2% in April 2019, while workers with a bachelors degree and higher experienced 8.2% unemployment in April. The surprise with the latest unemployment numbers for higher educated workers was the exponential increase from a year earlier, when only 1.9% were unemployed. Economists view this as a validation of the profound effect the pandemic has had on the labor market. (Source: Department of Labor)

Car Sales Have Cratered Since The Pandemic Began

A dramatic drop in car sales, brought about by the historical rise in unemployment along with the economy seizing, collapsed the demand for both new and used autos coast to coast. Federal Reserve data, compiled by the Federal Reserve Bank of St. Louis, reported an average of around 17 million new vehicle sales each month for the past five years. April data revealed that sales had plummeted to 11.6 million, with May sales expected to fall again. 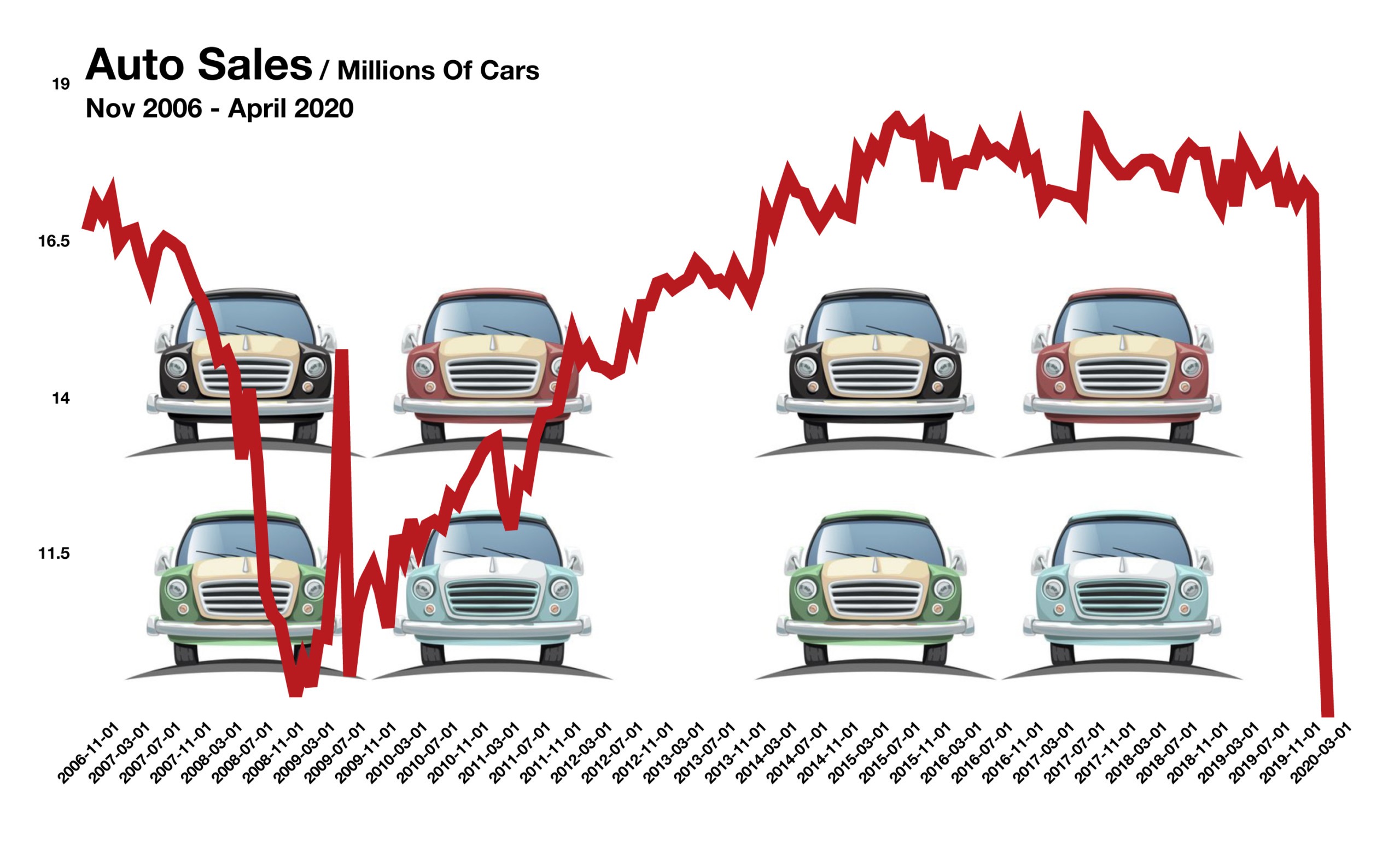 Adding to the glut of new cars are the numerous cars coming back from leases, increasing the number of unsold new and used autos in inventory. Automobile manufacturers have aggressively enacted incentives for buyers to finance and lease cars at historically low rates.

The auto industry is hoping that commuters will opt for individual personal transportation rather than taking mass transit following the fallout of the virus outbreak, with the expectations of increased auto sales nationwide. (Sources: Federal Reserve Bank of St. Louis)

Recovery to the economy has become hinged on the ability of the American consumer to regain confidence and start spending again. What consumers spend on goods and services represents roughly 70% of Gross Domestic Product (GDP). The Commerce Department, which tracks what consumers spend money on and how much they spend each month, reported the largest monthly drop in Personal Consumption Expenditures (PCE) since data tracking began in 1959. March PCE saw a 7.5% decline in consumer expenditures, as the pandemic restrained discretionary spending leading to a drop in over $1.1 billion in expenditures. Expenditures composing the PCE Index include automobiles, food, housing, furniture, health care, and clothing.

Consumer behavior has been altered since the pandemic began, with a drop for certain items such as cars, furniture, and clothing, yet with an increase in food purchases at grocery stores. Many believe that it may be months before there is a better gauge of what consumers will be buying and where the demand may be. (Source: U.S. Commerce Department)

Over Half of Unemployed Making More Than When Employed

The IRS reported that roughly 4 million Americans would receive their stimulus payments as a debit card rather than a check or direct deposit. The CAREs Act appropriated $2.2 trillion for Americans in order to bolster economic activity and provide stimulus to combat the effects of the pandemic.

So for those who have not received a stimulus check or direct deposit yet, a debt card may be on its way. The debit cards are being issued by MetaBank, which is the Treasury Department’s financial agent, and mailed in plain white envelopes from Money Network Cardholder Services. The card is known as an Economic Impact Payment Card (EIP). The problem is that the envelope and the card may appear illicit and fraudulent to recipients, who are already wary about what they receive in the mail. The IRS notes that if you’ve received a card and are still not certain if it is a legitimate EIP card, you can visit EIPcard.com. (Source: IRS.gov/corornavirus/economic-impact-payment)